Add options to construct Datum features in such a way that they reflect the standard.

Example - Datum A is a Plane, and Datum B is a cylinder bore nominally perpendicular to the plane.

As per both ISO and ASME standards, Datum B would be a Max Insc Cylinder Perpendicular to Dat A.

See bottom image for example (image shows shaft not bore but principle is the same). 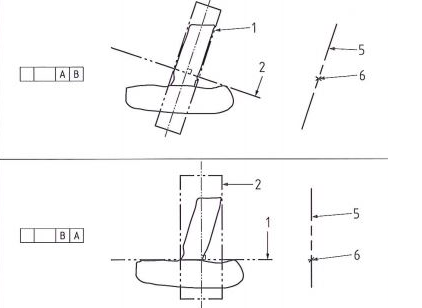 No one else think this is a good idea? Am I missing a simple trick to ensure that when used as a datum the feature is generated as per the standards?

I think it's a good (almost necessary) idea.? It would fit in quite well with another suggestion here: hit-based construction - first measure your feature as you do now, then construct a new, constrained feature from the hits of that feature.

Thanks for the well described suggestion Jon. The pictures really help. The more fleshed out requests are (such as this), the more likely other users should understand what is being requested, and so the more likely you will receive votes from others. Let's see who else votes for it.

I'm in - used my last vote for this. Initially didn't because we currently do this using tedious programming techniques that frankly, aren't understood by all of our programmers.

After considering the amount of time we spend doing this, and that an easy baked-in solution will be better understood (and less prone to error) - I'm deeming this vote-worthy.

I would think (hope) that Xact GD&T already computes and applies datums in the manner described. But we do not use Xact - what I'd like to get out of this is a proper datum feature which can be used in alignments for legacy GD&T dimensioning.

Be careful not using Xact. Don't forget about simultaneous requirement of a pattern.

legacy GD&T dimensioning doesn't check the holes as a pattern.

I don't think it does djams - I tried a few tests because someone (AndersI perhaps) suggested that it did, but from what I tried it didn't

I was told by Don Turcotte that it should do the right thing, and I have a faint memory of verifying it through testing. That was quite some versions ago, and I haven't tested again, so anything might have happened since. Perhaps you could share your testing ideas, Ninja? anders.isaksson@hexagon.com

Edit: A quick test with two cylinders, one perfectly perpendicular, and one at a slight angle, to the primary plane indicates that PC-DMIS does exactly what the standard says (at least in that case). Up to you Ninja to disproof :)

How one can test this to confirm;

1 - Create a legacy position in a "regular" alignment using a Plane | Cylinder | Line as datums.

2 - Create the same legacy position using the Related Actual Mating Envelope of the cylinder. You can do this with a construction (shown below). Note the translation shift.

3 - Create the position using Xact using the Plane | Cylinder | Line as datums. Xact will solve the RAME, and return results equal to the second legacy method. 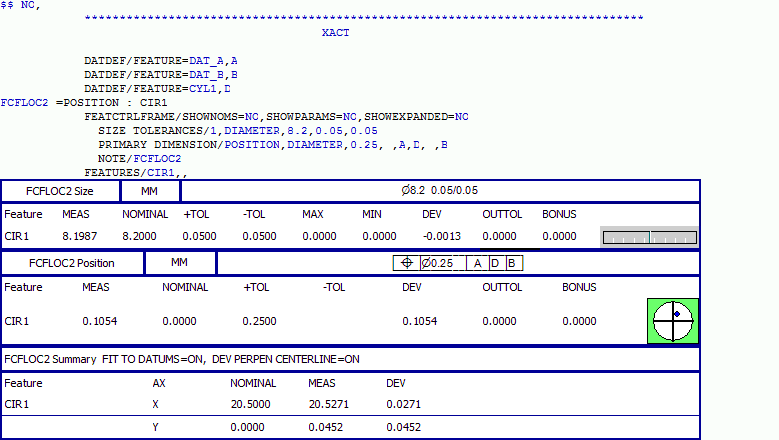 However! This is still a very valid suggestion. The way Dave has phrased this would allow those who use Legacy dimensions to build "more correct" alignments without the extra constructions required to build related AME features.

Nice trick on the max_inscr circle construction. And thanks for recognizing that these types of constructions still have benefit for us legacy users.

I don't know if more examples are necessary, but here's another (no graphics, sorry):

For DRF |A|B|C|, where all three datums are planes:

- Datum B should be constructed constrained perpendicular to datum A

Many think a plane/plane/plane DRF is simple. Hardly.

I would like to show you what we have so far and get feed back from you and anyone else interested in this new capability. I agree, this is not simple.

Please set this one to Planned.

Rob, I'm interested. I'm going to do a presentation at our Customer Days how to accomplish things like this in current versions, and it would be great to end by saying "...but you don't have to worry, this will be built in very soon..."

Unless I get a free upgrade for the suggestion? #wishfulthinking

This is one case of the more general suggestion in https://hexagonmi.userecho.com/communities/1/topics/23-drf-feature-construction-options-relative-to-other-featuresdatums, which asks for more constraints on constructions (like: "construct tangent plane perpendicular to primary plane" which essentially is the same as the OP).

Maybe collect all the votes on that suggestion?

Well spotted - merged. - although there were no votes on that other item, so it didn't bump this one higher

My comment looks very out of place now, as I replied to another suggestion "tangent line" which has been merged with this topic...