I'd like the ability to change the contents of a probe file without having to reconstruct the entire probe build. We have 15 production machines and are trying to simplify the process of changing a broken stylus. An under trained person won't know that a 4 x 67mm custom stylus is ITP part number STHM504011069.

If I could just edit the stylus names in the existing probe files in a text file format it would be much easier than having to create all new probe files. 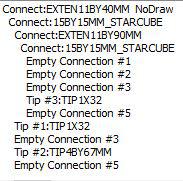